Manchester City has started building a virtual replica of its famous Etihad football stadium in the metaverse with the help of Sony. The Japanese multinational and the team signed a three-year partnership last November. The goal of this alliance, as announced by Sony, is to create a global online community unlike anything fans have seen before. Fans will be able to gather in the metaverse to interact with each other and the team, as well as establish new forms of connectivity with the club, says Sony.

“The Etihad Virtual Stadium will not only be a realistic representation of Manchester’s physical pitch, it will also be an access point to unique virtual experiences, where fans can create fully customizable avatars, interact with loyalty programs and express their passion in many ways. ” more ways,” says Sony

As the official Virtual Fan Engagement Partner, Sony is committed to running a proof of concept with Manchester City. In fact, Sony professionals have already been to the stadium to measure and virtually represent the Etihad.

Manchester City, one of the best-known soccer teams in the world, wants to capitalize on that popularity to create a global community of fans in the Metaverse. In the future virtual stadium, Manchester fans will be able to watch and experience matches from a new perspective, interact with their favorite players and purchase unique virtual items. Sony’s Hawk-Eye optical tracking technology adds a layer of visualization that will help fans better enjoy every game. 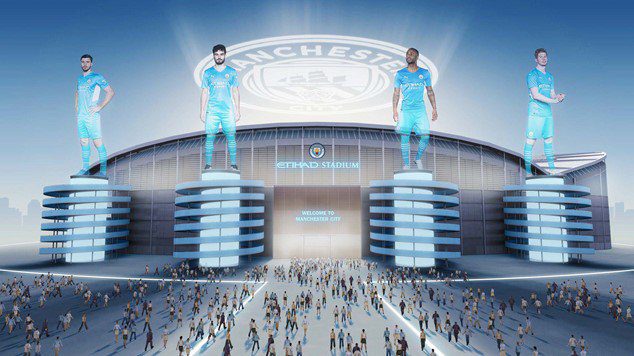 At the forefront of sport

At the end of November 2021, Nuria Tate, City Football Group Marketing Director, reported that Manchester City wants to lead the adoption of new technology to stay at the forefront of the sport. She said the metaverse would open doors for the club to explore new ways to engage and entertain its millions of fans, no matter where they are in the world.

In 2021, Manchester City was named the most innovative sports team in the world by the Sports Innovation Lab. Furthermore, it is the first club in the football industry to partner with a large consumer electronics company.

Sony is a Japanese company dedicated to creating audio, video, gaming, computer and mobile electronic products. Proof of his interest in the metaverse is the alliance reached with Wolf Digital World, MetaHero’s technology provider.

Manchester City has also been researching and engaging with the crypto/blockchain world for some time. In March of last year, it announced the launch of its own token, the CITY, in collaboration with Socios.com. CITY is a Fan token that is used to reward the club’s followers for their loyalty. CITY holders can access VIP areas or claim various prizes. From autographed sports memorabilia, to the chance to share a bench with players, take photos with them, or vote on the design of your team’s next uniform.

In addition to its own Fan token, Manchester City has already launched two NFT collections. The first, last May in collaboration with the artist Jon Noorlander. The crypto collection was used to commemorate another one of his Premier League titles. The second crypto collection, launched at the end of September, was designed by artist Alan Bolton, to represent the process of creating the “perfect footballer”.

Sports experiences in the Metaverse

The metaverse has made a huge impact on various industries. In the field of sports, the NFL have also begun to delve into this concept. Earlier this month, the National Football League opened a virtual headquarters in the Roblox metaverse to offer online events and gaming experiences to its fans.