DeFi's flagship protocol on the Ethereum blockchain, Aave is back with a third version. An update supposed to remedy a large number of problems in the world of decentralized finance.

Now present on blockchains like Ethereum, Avalanche or Polygon, the DeFi Aave protocol continues to grow. Two days ago, the project leaders announced the online release of V3. Let’s see what this changes!

The Key Points Of Aave’s V3

The new version of the Aave protocol intends to solve a certain number of problems. To simplify, we can isolate 4 main subjects:

It is according to these main axes that the development team proposed a revision of the protocol and a more efficient version of Aave. As the team reports in a tweet posted the day before yesterday: 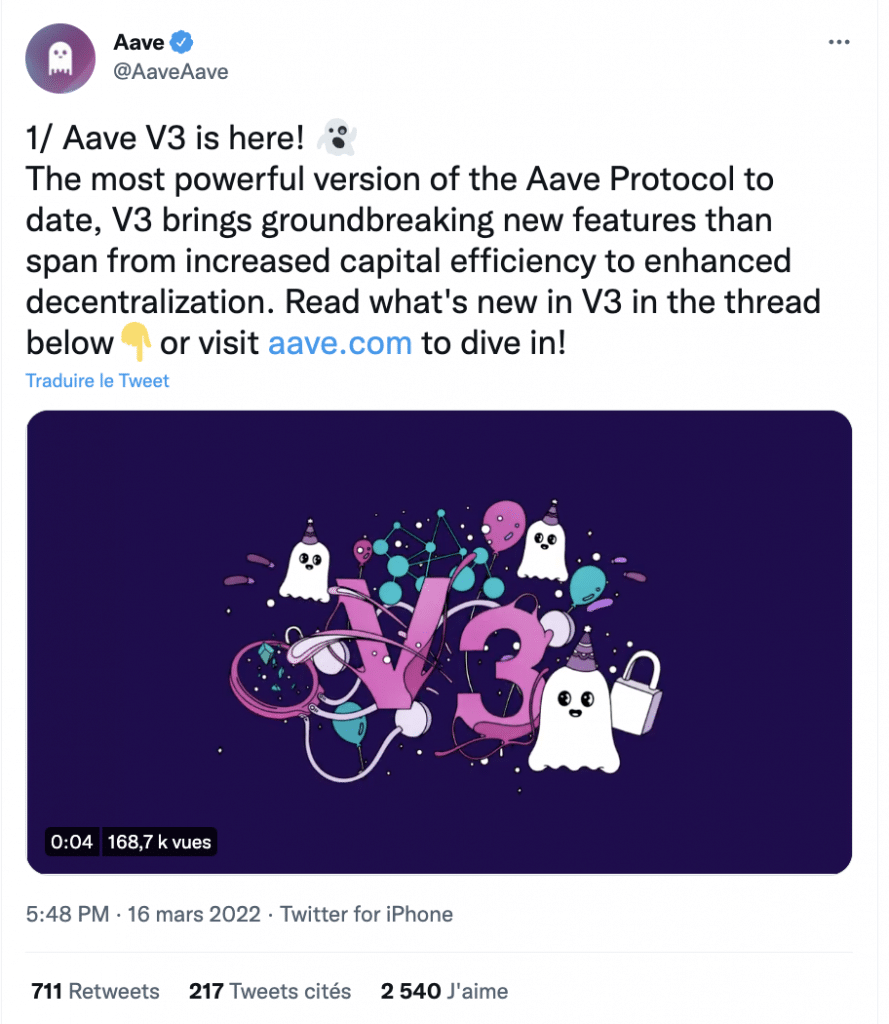 V3, the most powerful version of the Aave protocol to date, brings revolutionary new features that range from increased capital efficiency to enhanced decentralization. Read what’s new in V3 in the thread below or dive into the Aave site!

That was goal number 1 of this update: the promise of better returns for liquidity providers . A rather ambitious goal, when we know that the total liquidity of the Aave protocol is close to 20 billion dollars on all the blockchain networks covered.

The project leaders started from the simple observation that a large part of this cash was not used. V3 now allows users to use dormant capital more easily. Implementations that will have no impact on solvency and will not require having to reallocate assets to other protocols.

In this way, the protocol reinforces its security by implementing an “ Isolation Mode.” This new tool allows to separate the assets recently listed by the protocol. Thus, this new mode added by V3 makes it possible to continue adding new assets while limiting their impact on the entire protocol in the event of a failure. By adding this option, the Aave project intends to minimize systemic risk. A tool that could prove to be very effective, in particular to fight against “reentrancy” type attacks. For this mode to be activated on an asset, the owners of the Aave governance token will be invited to decide, by means of a vote.

V3 also introduces a new “High efficiency” mode. It should also maximize capital efficiency when there is a correlation between the price of collateral and the price of borrowed assets. The implementation of this new mode should in particular make it possible to improve the effectiveness of guarantees.

The third version of Aave also placed a strong emphasis on risk management. Protocol governance can now set borrowing limits for users. Same thing for liquidity providers. Not all changes will be handled by governance. Indeed, V3 introduces what it calls risk administrators.

These new players will have a right of action on the risk parameters of the Aave protocol without requiring a vote from the governance. This implementation also improves the decentralization of the protocol.

Initially developed on the Ethereum blockchain, the Aave protocol is now present on other blockchains such as Avalanche, Arbitrum, Harmony, Polygon or even Fantom. On this axis, version 3 of the protocol is supposed to improve transfers between the different blockchains.

For this, Aave unveiled Portal, a bridge that connects the different instances. Portal’s primary role will be to facilitate the transfer of funds from one protocol to another. This initiative should make it easier for users of different blockchains to operate their arbitrage operations. The deployment of Portal should also allow more efficient access to the liquidity of the protocol. And this, regardless of the blockchain.

In its V3 white paper, the Aave developers explain these new features:

The underlying asset can then be provided to Aave on the destination network on a deferred basis, passing it to a pool after it has been moved by a bridge.

What Impact On The Price Of The AAVE Token?

This announcement had a real positive impact on the AAVE token. In the tweet published on March 16, the Aave protocol revealed the availability of this third version. The graph below, which shows the price of Aave over the last 7 days, perfectly illustrates the situation.

NFT: Trader loses more than 1 million Naira because of a bad click!