Azuki: the collection that shakes the universe of NFTs

LWhile its development is still recent, the NFT market has already dedicated many projects. Focus today on the meteoric rise of the Azuki project . A project that could quickly overshadow the behemoths of the sector such as Bored Ape Yacht Club or CryptoPunks.

Azuki: an NFT project hosted by the Ethereum blockchain

The NFT Azuki collection is inspired by the eponymous Japanese anime. Like other well-known projects like the Bored Ape Yacht Club, the collection consists of 10,000 unique pieces .

It was launched earlier this year by a Los Angeles-based start-up . The team behind the project is made up of 4 people who preferred the anonymity of the pseudonym. We thus find ZAGABOND, 2pm.flow, location tba as well as HoshiBoy at the controls.

Few information on the pedigree of the team, except that they are former companies like Google, Facebook having for some already worked on DeFi protocols.

This project launched 3 months ago is hosted by the Ethereum blockchain: a safe bet on the NFT market. If the Solana blockchain is gradually catching up with Ethereum, it is clear that most “hype” projects still work on Ethereum today.

To be convinced of this, all you have to do is follow the sales volume on the different block chains. According to data from CryptoSlam, over the last 7 days, the trading volume on the Solana blockchain is 10 times less than on Ethereum. With respective volumes of 64 and 674 million dollars. Over the last 7 days, the 12 projects with the largest sales volume are Ethereum stamped projects.

The dazzling success of the Azuki collection

In the space of 3 months, the project has gone from embryo to one of the most bankable NFT projects on the market. In barely a quarter of existence, Azuki is already among the 10 best-selling projects in history. With an eighth position for a total sales volume of $540 million if CryptoSlam is to be believed.

On the Opensea platform, a reference for the purchase and resale of NFT, the project even topped the best sellers over the last 7 days. Looking back to the last 30 days, Azuki is second only to Bored Ape Yacht Club and Mutant Ape Yacht Club . Currently, the cheapest NFT (Floor Price) available on Opensea can be accessed for 27.8 ETH ($96,400 at the current Ethereum price).

But then, how to explain this rapid hype around the project? According to Thomas Bialek, NFT analyst at The Block Research, the popularity of the project is based on its ability to have been able to generate a real community feeling for the members. According to him, Azuki is on the way to succeeding in its bet to expand the anime theme to the general public and NFT investors.

Good to know: in parallel with the NFT project, the project leaders have also launched their own token: the BEAN . In reference to the literal translation of Azuki which means “red bean” in Japanese.

But the NFT market also works a lot on announcement effects. And the recent sale of the collection’s NFT #9605 has helped boost the hype gear. Sold for more than 420 ETH (1.4 million at the current Ethereum price), this coin considered one of the rarest in the collection has shed even more light on a project that was already arousing a lot of interest. .

A strong competitor for Bored Ape Yacht Club and CryptoPunks?

It’s hard to predict the long-term success of the Azuki project. The NFT market remains extremely volatile and still seems to operate on impulse. The competition there is particularly fierce and the hype could increase as well as run out of steam.

The following table allows you to visualize the extent of the volatility with the evolution of the volume of sales for each collection over the last 24 hours: 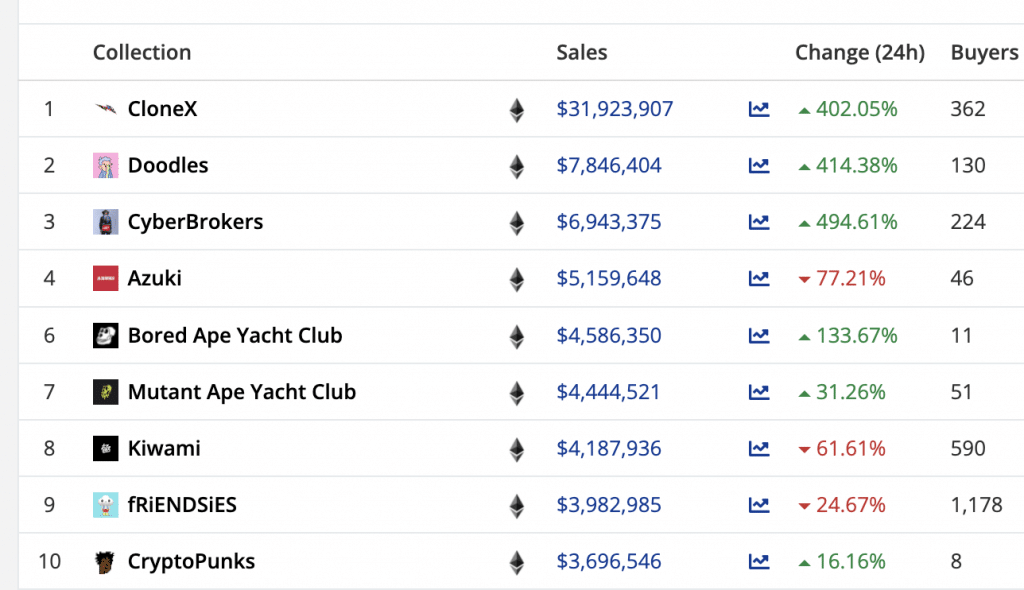 Thus, we understand that CloneX could also claim to become a strong competitor to already well-established projects. To be able to claim a place of choice on the market, only one condition: hold on for the duration.

And for this, the development of the feeling of belonging will be an essential and strategic factor for Azuki. As for all NFT projects.

What is DOT, the cryptocurrency of the Polkadot blockchain

What is CryptoLexicon, the dictionary (wikipedia) built with AI and NFT for Web3